As I write this, I know of only two restaurants in the U.S. serving the cuisine of Wenzhou, China. Golden Corner Noodles in Flushing, Queens, New York, and Wenzhou Fish, Noodles & More in San Jose's Japantown. By the time you read this, most likely, one of the two will be gone; alas, it will be the one in San Francisco's neighbor to the South.

Wenzhou is a Chinese city in Zhejiang Province, which is immediately south of Shanghai.  Located in a coastal enclave, it was historically isolated from the rest of China, and thus developed a distinct sea-food based culinary culture, as well as a dialect of the Wu language that is unintelligible to even its nearest neighbors. Wenzhou's significance in the context of Chinese food, a well as the rarity of its cuisine in the Chinese diaspora are well documented by an article by Jacqueline M. Newman in Flavor and Fortune.

Wenzhou Fish, Noodles and More* was opened in late 2016 by the husband and wife team of Max Soloviev and Carol Chen after sinking $2 million into renovating a historic building in San Jose's Japantown.  I filed this intelligence in my memory banks for possible future action then forgot about it, understandable because downtown San Jose is a place I had visited perhaps twice in the 50+ years I have lived in San Francisco.  Visiting the restaurant became a matter of some urgency, though, when news came through a couple of months ago that the restaurant would be closing at the end of the year. I am carless (and not even a driver), so when my daughter arrived in town for a Christmas visit we rented a car and trekked to San Jose (combining the restaurant visit with a visit to the San Jose Museum of Art, which had an exhibit she wanted to see.

At Wenzhou Fish, Noodles and More, I ordered two iconic Wenzhou dishes, "Wenzhou Silky Knocked Fish Noodle Soup" (温州敲鱼面) and a "Wenzhou Style Stuffed Pita With Dried Vegetables & Ground Pork" (梅菜干麦饼) to share with my daughter who, being somewhat averse to wheatens, ordered a more conventional fried rice dish for herself. The "Knocked Fish" is so-called because a "dough" of fish flesh scraped from the skin combined with a little potato starch is knocked into a thin, flat mass with a wooden dowel, lightly pan fried, rolled up and cut into into translucent ribbons with bits of fish visible. This slow-loading (but worth waiting for) video shows a woman in Wenzhou making the "knocked" fish noodles. 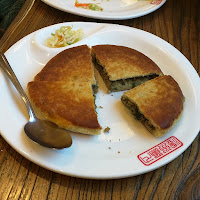 In Wenzhou FN&M the fish noodles are combined with some fresh conventional wheat noodles and vegetables in a savory fish-based broth. I found this dish refreshing, almost addictively so, and a good counterpoint to the fiery Sichuan and spicy Xi'an soups I have taken to in recent years. The Wenzhou "pita" is. I discovered, a common street snack in Wenzhou. The dried (actually pickled) vegetsbles in the rendition we were served did not overwhelm the ground pork as it might have, and both I and my daughter (who is far from the committed carnivore that I am) both enjoyed this.

While we were dining, co-owner Carol Chen was conversing with a woman at the next table in the Wenzhou dialect. I can normally pick up on Shanghainese and other Wu dialects almost instantly, but even straining to listen to the conversation, could not recognize a single word in the Wenzhouhua.


I talked to owner Chen afterwards about the closure. She said business was good, but not good enough to support the overhead of such a labor-intensive operation as her restaurant. She and her husband are not throwing in the towel, though, and are looking for another suitable venue. She mentioned that someone in San Francisco had inquired about operating a franchise, and they had begun to think in terms of a central kitchen to support more than one location.

Will opportunity knock more than once for knocked fish noodles in the Bay Area?

*I suspect the comma is an unintended intruder; most Chinese restaurants have fish and noodles, but very few have fish noodles.