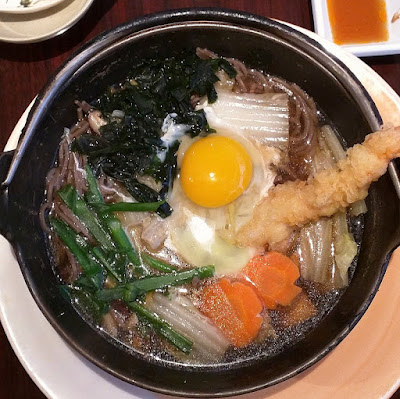 Clever wordplay, eh? Actually I was sober as a judge when I downed the nabeyaki soba at Dojima-ann, and expect to be in the same state long after Anderson Cooper's last giggle of the evening takes air.  The eating of soba, the nutty-flavored buckwheat noodles, is a New Year's Eve tradition in Japan, but as far as I know has nothing to do with lining one's stomach for a night of hard drinking (something Japanese salarymen are alleged to do every night).

In doing my research (a.k.a. Googling) for the best places to eat soba, I came across Dojima-ann, one of those places that flies under the radar because it's right under our noses (at O'Farrell and Powell Streets). Dojima-ann's menu offers 15 hot noodle soups (and another 6 cold noodle dishes), each with a choice of udon or soba noodles. It being close to dinner time when I arrived there, I decided to go for the nabeyaki, a meal in itself, along with a side of gyoza. 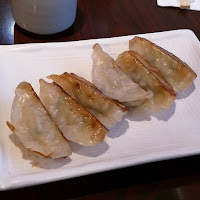 Nabeyaki (a.k.a. nabe-yaki) is a form of hot pot, a one-dish meal served in an iron pot or clay pot on cold winter days.  It's more commonly found with udon noodles than soba, but that goes out the window on New Year's Eve. In Dojima-ann's version, chewy soba noodles are served in a rich miso broth, along with (as specified on the restaurant's menu) chicken, egg and vegetables topped with shrimp tempura.  The chicken came in tender, not over-cooked shreds, accompanied by scalloped carrot slices, mushrooms, Beijing cabbage, nori (seaweed) and various greens. The raw egg was broken onto the top of the broth which already contained the chicken, leaving no doubt as to which came first on this occasion.  The single  large shrimp tempura was as tasty as it was decorative, and the miso broth's savoriness was multiplied by the contributions of the ingredients that essentially "cooked" in while I waited for it to cool to a slurpable temperature.

The six gyoza in my side dish, though on the smallish side, were intensely flavorful, and a well-recommended protein add-on.  I wanted to try the potato croquettes, but judging from the menu, they are only available with the curry udon or as a bento box item.

Dojima-ann, from all accounts (including my own limited sample) serves decent Japanese fare at reasonable prices, and is very conveniently located once you know it is there.  I'v probably passed it a hundred times on the Geary bus without noticing it, obscured as it is by throngs of tourists in the street.  I'll definitely return to vet the udon, as well as to enjoy some non-noodular menu items.