Waiter, There's An Iron Goddess In My Noodles! (At Hanlin Tea Room) 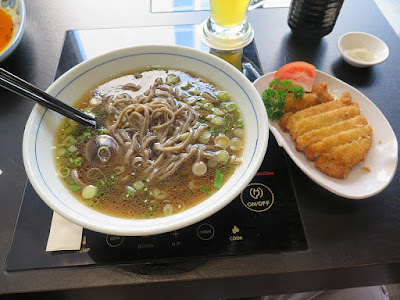 Hanlin Tea Room, a Taiwanese chain which  originated in Tainan, opened its San Francisco branch today in the commodious space at the corner of Jackson and Kearny Streets once intended for Ten Ren's Tii Restaurant and Tii Cafe. Hanlin claims to be "The first store to sell milk tea with tapioca pearls in Taiwan" but it is much more than a boba joint. It's a casually elegant eatery with a range of fine teas (available by the pot or iced), Taiwanese style "small eats" and more elaborate lunch and dinner fare. 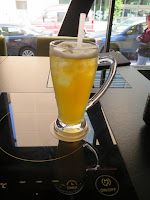 When I arrived there around 3:00 PM on their first day of business, there was a cluster of people gathered by the door for their opening promotion of "buy one get one free" boba drinks, but also a respectable showing of sit-down diners in a main dining area).  I was led to an adjoining room (which once had a short life as the Tii Cafe but has been re-integrated with the main area. I pored over the menu, but I already had a mission for being there: prominent on Hanlin's website and featured in their elaborate in-house menu, but tucked away in a small corner of their paper takeaway menu was a novelty item, "Tea Noodles" (Cha Mian).

According to Hanlin Tea Room's promotional materials, development of their tea noodles required studying the procedure in Japan, and testing of various teas for suitability; they finally settled on an aromatic Tie Guanyin ("Iron Goddess") tea for this purpose. There are three tea noodle variants on Hanlin's menu: Pork Chop Noodles, Fried Chicken Noodles and Chicken Leg Noodles. In actuality, the meat "toppings" are side dishes, and the sole visible protein in bowl as served is a herd-boiled "tea" egg which tastes of pu'er tea. 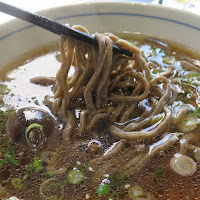 I ordered the "pork chop" noodles and a side order of "hot & spicy tofu" which seemed the next best thing to stinky tofu, which they don't offer (discretion is the greater part of valor), and an iced jade green tea. The timing of my meal seemed both approprate and reasonable.  First came the ice tea, then the appetizer, and finally the noodles.  The tea noodles were distinctly greenish, though not quite so green as spinach noodles, thick, and quite wabe. They were obviously hand-made, whether on the premises or not, judging from their irregularity. I enjoyed the noodles' robust chewiness, but to tell the truth, I couldn't really detect the Iron Goddess flavor, not that I have a great tea palate. What came through was sort of a matcha tea bitternesss, which is not to say that there was anything unpleasant about it.  The broth my noodles were served in was deep, meaty-rich, and very onion-y. It was pork-based, according to my server (the other two options come with a chicken-based broth).

My "pork chop" was in fact a breaded and fried pork cutlet, tonkatsu-style, sliced for convenince.  It was  tender, juicy and tasty, but had little connection to the noodle soup, other than a pork-flavor "theme:" I wondered later if it weren't meant to be tossed into the soup. 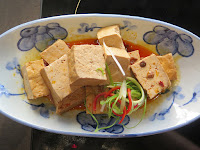 An overall impression I formed of this place was that the main dishes are on the pricey side, mostly upwards of $15 but the appetizers and the tea pot prices quite reaonable.  My "Pork Chop Noodles" was $15 but my tofu appetizer (which I enjoyed very much) only $4.  Hanlin Tea Room also offers a Taiwanese Beef Noodle Soup for $16 which I will have to vet out of curiosity, but in general I'll probably adopt a strategy of going to Hanlin at off-peak times and chilling out with a pot of tea and a couple of appetizers while I diddle my devices. (Which reminds me, I forgot to check if they have live wi-fi.)