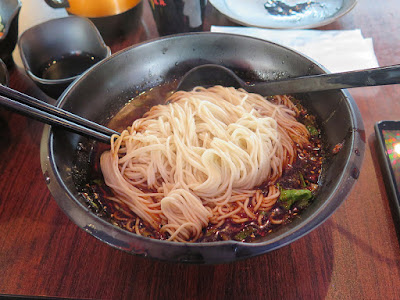 Chongqing Xiao Mian is the sixth effort by the ex-Z&Y pair that began by transforming The Pot Sticker into (now defunct) "Ma La Yi Pin" and later took over the venerable Uncle's Cafe (now Spicy King) down the street on Waverly Place. They also operate Spicy Queen in the Richmond, as well as outposts in San Mateo and Newark.  Unlike the other venues, Ma La Yi Pin #6, as its menu dubs it, is from the mian guan (noodle house) mold, focused on noodles and accompanying appetizers and side dishes As such, it is a more inviting place for people like me who fly solo and are just looking for noodles and a nosh without the guilt of occupying a space at a full-service restaurant promoting more elaborate and profitable dishes. In this respect, the Chinese mian guan is really the prototype of the ramen-ya. 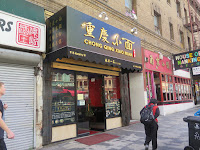 Chongqing Xiao Mian was empty when I arrived at 2:00 PM on its opening day, though another couple of tables were filled while I was there. I pretended to study the brief menu, though I almost knew it by heart already, and wouldn't let myself order anything but the house's namesake dish, Chongqing xiao mian, to which I added an order of potstickers for protein. Based on a previous experience at another of the Wu-Du group's properties, I was poised to insist my spicy noodles come to me spicy, but the server had it covered: "It's very spicy," she said, and I assured her that was the way I liked it. 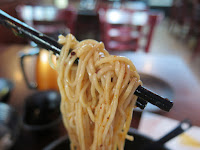 My bowl of Chongqing Xiao Mian did not disappoint. A veritable mountain of extruded fine noodles sat in a pond of chili oil augmented with a number of ground condiments and spices including Sichuan peppercorns, and what appeared to be garlic shoots. It was honestly spicy, eye-watering, nose-running spicy but not so much as to mask a complex flavor profile. The noodles themselves were fresh and al dente, and there was such a quantity of them packed into the bowl that I felt like I had consumed a whole Mission burrito, so sated was I after my meal. This is a bowl I will return for (after vetting some of CQXM's other offering). 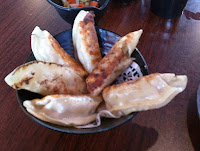 As for the potstickers, they were pretty generic in shape, size and flavor, but well cooked with nicely browned facets, and tasty. I'm not sure if they were made in house; I began by asking the server that question, and she initially replied she didn't think they had them today, then checked herself and consulted the chef, who assured her they did. In any event, they filled the bill, providing some needed protein (and unneeded carbohydrate!).

Like some of the group's other branches, Chongqing Xiao Mian offers a whole range of regional noodle styles, including Guilin mi fen, Wuhan Hot Dry Noodles, liang fen, etc. along with other Sichuan classics. With such a range, one tends to be skeptical,  but since this branch is a noodle-focused enterprise I'm hopeful the chef knows what he's doing.