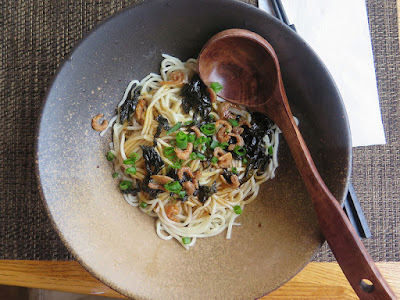 The vicinity of Geary Boulevard and 2nd Avenue has been very, very good to me, if not always to its restaurant tenants.  I've gotten at least a dozen blog posts out of six different establishments that have  inhabited just three addresses within half a block of that intersection; they've supplied me with delights from Shandong, Xi'an, Sichuan, Korean and Burmese cuisines, with some bonus Xinjiang dishes still beckoning as well. And that was before Gourmet Noodle House, the intersection of noodle cuisine and Shanghai cuisine, opened at the very corner of Geary and 2nd.  Behold, my third GNH review in four weeks!

My attraction today was N2, "Noodles W/ Scallions and Dry Shrimp." The Chinese in the menu identifies the noodles as 拌麵 (ban mian, pronounced like bü mi by Shanghainese), not to be confused with the Fujianese "ban mian" which are flat, square shaved or hand torn noodles.  Shanghai's "ban mian," or "tossed noodles" are sometimes compared to lo mein, though in fact it's a leaner, cleaner dish. In its most basic construct, ban mian consists of freshly cooked noodles that have seasoned, sizzling hot oil poured over them. The hot oil is invariably infused with spring onions, as well as other condiments according to specific recipes. In the case of Gourmet Noodle House, the condiments also include dried tiny shrimps and bits of "wood ear" mushrooms. 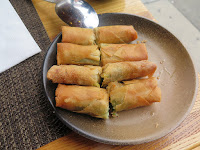 Shanghai-style ban mian is not really designed to supply protein (it's generally enjoyed in its simplicity without toppings) so side dishes are important to the making of a full meal.  Out of curiosity I ordered S1, "Yellow Croaker Spring Rolls" as a side dish. Before Gourmet Noodle House's advent, I had never head of such a creation, but a little research indicated that it is very popular at Gourmet Noodle House's Shanghai branches; at GNH's busiest (Zhongshan Park) branch, it is the most recommended dish by reviewers on dianping.com (China's Yelp, as it were).

I've rarely ordered ban mian in a restaurant, and my expectations may have been conditioned by the way my wife has prepared it, but I found Gourmet Noodle House's version a little on the dry side. It took quite a bit of extra stirring to coat all the noodles so they didn't stick together, and there was no pool of liquid left in the bottom of the bowl as I would expect. Yes, it was a little more oil the dish demanded, but what the heck, it's vegetable oil after all. Otherwise, the combination of dried shrimp and scallions was rewarding, and the noodles themselves happily chewy.

If I found my noodles a little short of the mark, my yellowfish spring rolls were a revelation; at first glance these appear a little pricey, at $7.95 for four smallish pieces, but I found them worth every penny. The thin, crackly, nearly greaseless cylinders were each stuffed full with yellowfish filet and bits of shepherd's purse; there was no filler, no rice and  beans (or bean sprouts) for these chunjurritos. I'll gladly order these again.