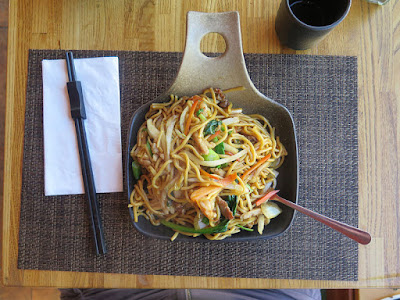 I was hoping for some nice fat Shanghai cu mian (粗面) when I headed to Gourmet Noodle House to complete a trilogy of noodle dish types. I'd already had their soup noodles (tang mian), two exemplary versions, in fact, and the house Shanghai-style tossed noodles (ban mian). It was time to vet the fried version (chao mian, or "chow mein" if you will).

A mention of Shanghai chow mein may automatically call up images of the characteristic fat, udon-like noodle the Shanghainese call cu mian  (粗面, "thick noodle") sometimes used in this dish. In reality, this is as much the exception as it is the rule for chow mein in Shanghai;  home cooks find it a daunting task to bring this noodle to the right degree of done-ness in a stir-fry, and for the ubiquitous street-side chow mein vendors who freshly stir-fry noodles for their customers, it would be too time-consuming. For Gourmet Noodle House, it makes sense to stick with the medium-thick house-made alkaline noodles the chain is known for. 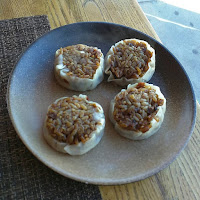 I ordered "N26, Shanghai Syle Fried Noodle W/ Vegetable, Chicken Beef and Shrimp." along with a side order of four Shanghai-style shao mai (siu mai). My chao mian/chow mein came as a thing of beauty on a square plate, a tangle of stir-fried, fresh-made noodles sumptuously topped with the advertised ingredients. However, I found the noodles a little too far on the soft side of al dente; it was also too light on the soy sauce for my tastes, strange as that sounds.  My Shanghainese wife whips me up some chow mein often, in old school style, with the whole affair pretty much doused with soy sauce; Gourmet Noodle House's lighter style might be a pitch to the millennials the chain is marketing to, but I found myself longing for my wife's saltier, muskier version.

The shao mai were Shanghai-style, as my server promised, with most of the savory filling provided by soy-sauce infused rice. They were a well-tonsured version, lacking the prepuce-like top to the the money-bag shape Shanghai shao mai sometimes come in.  Cut or uncut, they were nonetheless tasty.