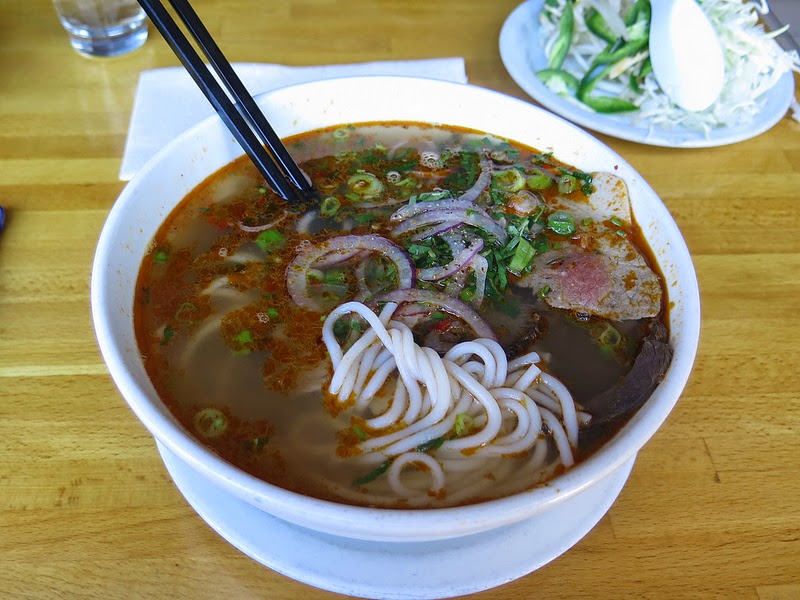 It was Friday and that Pavlovian bell rang, but I recalled again that the reputedly peerless "only on Friday" bun bo Hue at Ha Nam Ninh may be becoming a dim memory, so I went to my bucket list and picked off Tin Vietnamese restaurant on Howard Street. Tin's location (and suspected gentrification role) as well as its menu descriptors suggested that this was a "gateway" restaurant, but it had ended up on my bucket list based on the recommendations of two people whose knowledge of Vietnamese food I highly trust. I only had to jump on the #30 Bus and I would be right there, and they had bun bo Hue on the menu. 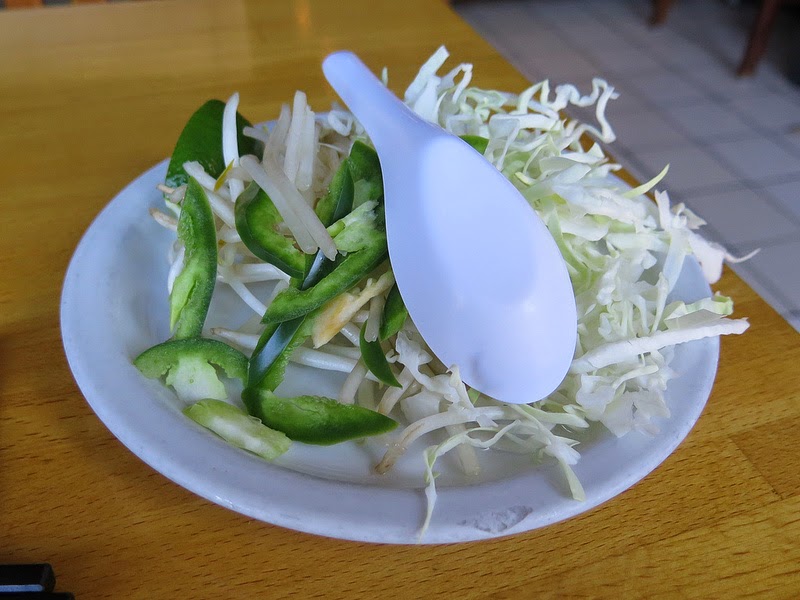 Tin's menu is laudably modest, suggesting that they stick to dishes they know they do well. From the eight-item "Noodles With Broth" section of the menu, I ordered my BBH and a mini-pot of Red Blossom Tea's excellent Tung Ting oolong tea to accompany it. While I was waiting for my soup, the little garnish dish arrived containing, in this instance, jalapeno slices, bean sprouts and shredded cabbage. Why do they always bring the garnishes well ahead of the soup, I wondered. Do people munch on them? I was; in fact, gnawing at some cabbage shreds as these thoughts went through my mind.

When the soup arrived I inventoried the contents. It seemed a classic broth, red with chili and containing chopped cilantro and spring onions, onion slices and Vietnamese flora that I am not on a first name basis with. It tasted meaty with lemon-grassy undertones, and a little shy of spicy (though addition of the jalapeno slices brought it to the nasal drip-inducing stage).  As I expected, there were no blood cubes adorning the bowl (hard to come by, even in the Tenderloin).  As advertised, there was both rare, thinly sliced beef, and equally thinly sliced beef shank. Instead of a pig's knuckle, however, there were slices of pork pate (pork "bologna" on the menu).  No blood nor bones were to be found in my bun bo Hue.

Overall, there were generous portions of the proteins, and everything (both meat and veggies) appeared to be fresh. the only thing that marred a strong, if slightly eccentric, bun bu Hue were the noodles. They were the right size, and in the right proportion to the broth, but on this occasion overcooked and too soft for my taste -- a fault easily avoided with due diligence.