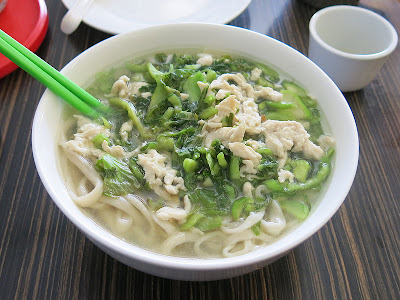 I headed for 19th and Taraval at lunchtime today, fully intending to cheat on my new best hand-pulled noodle friend, Shandong Deluxe, with a dalliance at House of Pancakes (that's pancakes as in niu rou bing) which brazenly established itself a couple of weeks ago a mere block away from Shandong Deluxe. It was not to be, as House of Pancakes rudely greeted me with a "Closed on Wednesdays" sign.  So I headed for the outstretched noodle-pulling arms of Shanghai Deluxe once again, thanking my stars for having such a delectable Plan B at hand. 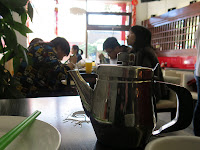 I settled on "Mustard Pork Noodle" on the menu, the classic xue cai rou si mian (雪菜肉丝面).  "Xue cai" is literally "snow vegetable" in Chinese, but refers to a leafy vegetable (typically mustard greens) that has been preserved through pickling or salting. This would not ordinarily be my automatic choice, since I'm not a fan of leafy greens, even pickled (they're all spinach to me), but I'm determined to work my way through Shanghai Deluxe's entire noodle menu.  Not only that, but it's a great dish for letting the noodles really show their stuff, with no chance of being overwhelmed by the bland pork shreds or the subtle vegetality of the broth. It turned out to be a wise choice.  Shandong Deluxe appeared to have sensed my intent at infidelity down the block and really put out. The noodles today were so perfectly bold and chewy that I ate them as fast as possible lest they lose that "QQ" quality before I could get to the bottom of the bowl. Yes, the broth was bland, but nothing a little chile oil couldn't fix.  I didn't resort to that, however, until I had dug out every last shard of wheaty loveliness.

Hear that, House of Pancakes? You'll get to wrap your lithe and limber noodles around my desire yet. Let's see if you can top Shandong Deluxe's snow job!