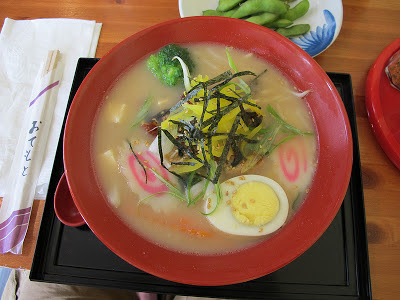 I believe that size matters, when it comes to noodle girth.  In my world, therefore, a good bowl of udon -- if you can find it -- trumps a good bowl of ramen. A bowl of duck udon I had in (of all places) Shanghai ranks among my all-time noodle noshes.  It's really a numbers game, however; there are so many more people intent on making a transcendental bowl of ramen than of udon that the odds are against easily finding the latter.

When something reminded me of the existence of the four-month old Kaka Udon Kitchen on Franklin St., a couple of things raised my expectations. First, the word was that they made their own noodles in house (and how many ramen shops can you think of that do that?); second, I discovered that their menu included Grilled Eel Udon, and I decided I wanted to try that instanter.

Kaka Udon Kitchen's ambience is casual and pleasantly proletarian, down to the plastic decorative teapot my order of tea came in.  The menu offers a mix-and-match scheme similar to that used by the late, lamented Good Earth Cafe on Kearny St.: choose a bowl size (small, large or extra large), a broth type and toppings.  There is also a section on the menu of "Specialty Udon" (large size specified)  from which I chose my Grilled Eel Udon. 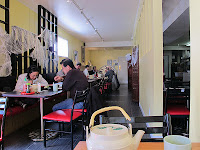 While waiting for my noodles, I was brought a complimentary plate of edamame, which turned out to be limp and tired. My "large" bowl of udon, when it came out in a plastic bowl was about the size of a "small" bowl at your neighborhood pho joint, but crammed with noodles and add-ins, enough for a hearty lunch.  There was a respectable, if not overly generous amount eel in the bowl, and it was the best part of the dish. In addition to the usual toppings, enoki mushrooms and cut corn lurked beneath the surface. The broth (apparently default for the eel udon, oddly enough), was a tonkotsu style broth, milky and yellow, but too sweet for my taste. The noodles were the biggest disappointment; although obviously (from their irregularity) hand-made, they came out much too soft, almost gelatinous, with a mere soupçon of chewiness. They were also flavorless, and I felt I was left with a belly full of gummy starch.

Kaka Udon Kitchen's menu, in addition to udon and accompanying appetizers, also has an extensive list of sushi rolls. When I was there at lunch time, a lot of people appeared to be ordering from that section of the menu.  Maybe they knew something I didn't.