After several recent rounds of ramen, I felt the need for a more muscular noodle soup form and Shandong Deluxe, a new place in the Parkside I just got wind of seemed to fill the bill. Shandong Deluxe has only been open for about 10 days, in the space formerly occupied by Ramen Doraku on Taraval St. The awning promises "Hand-cranked Noodles and Dumplings" in English, though the Chinese seems to refer to hand pulled noodles. 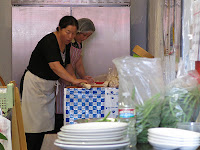 The menu at Shandong Deluxe offers not only noodles and dumplings (shui jiao) but also an assortment of other Northeastern China small plates, plus a couple of surprises, which I'll get to.  (Since I was Jonesing for noodles, I didn't pay a lot  of attention to other sections of the menu, and unfortunately they don't yet have tri-fold takeaway menus.) I ordered the Lamb Noodle soup ("plain broth" lamb noodles in Chinese). I contemplated an order of jiaozi (dumplings) as well, and am glad I didn't, because I had already had a light lunch and the noodle portions turned out to be enormous.  My bowl was easily the size of a "large" bowl in noodle and pho joints that offer two size options, and contained a generous amount of tender chunks of lamb as well.  The "plain" broth seemed to be flavored primarily from juices from the lamb, and while tasty enough, benefited from a dab of the orange-colored chili oil provided at the table. The noodles appeared to be extruded (i. e. "hand-cranked") rather than hand pulled; they were slightly flat like linguini noodles only larger, and uniform in girth throughout.  Although two women were kept busy making dumpling wrappers and kneading chunks of dough into noodle-ready portions, I didn't observe any noodle pulling.  That's not a knock; while noodle-pulling makes for a good shit-show, it sometimes results in your noodles being delivered with a bit more alkalinity than you might like. The fresh noodles in my lamb soup were without a trace of bitterness, and perfectly al dente.

As far as the surprises I mentioned (and there may be more in other sections of the menu), they lie in the first two items in the noodle section of the menu.  "Xinjiang styleChicken with Noodl" is none other than the hallmark Uyghur dish known in Chinese as "Da Pan Ji," or "big plate chicken." It consists of a whole chicken, cut up and stewed in a very savory sauce, typically with potatoes. The noodles are served on the side for sopping up  the delectable sauce when most of the chicken has been eaten. "Big plate chicken" is a dish that is very hard to find in the Bay Area. The second item on the noodle section of the menu, "Sam Sun Noodle" is both surprising and confusing. "Sam Sun" usually refers to a Korean noodle dish (not surprising for a Shandong restaurant), but the Chinese identifies it as yet another Uyghur dish, "Xinjiang Ban Mian," otherwise known as lagman.  Perhaps the two dishes are similar enough for it to have the dual identity, or perhaps two separate items got mixed together in composing the menu. In any event, it comes as a surprise to discover a Xinjiang Uyghur presence in a Shandong-style restaurant, at least in San Francisco.

As far as the Shandong Deluxe premises go, little change seems to have been made from its previous use; it looks just like the ramen-ya it once was, down to the big mural on the wall. This makes it at once a perfect place to nosh on noodles, and at the same time a bit jarring. It also makes for a touch of bitter-sweet historic irony, IMHO, with a ramen joint in a Chinese neighborhood vacating and its premises being taken over by a Shandong cuisine establishment.

I'll definitely be back to explore further the delights and mysteries of Shandong Deluxe. 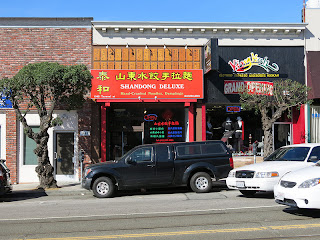