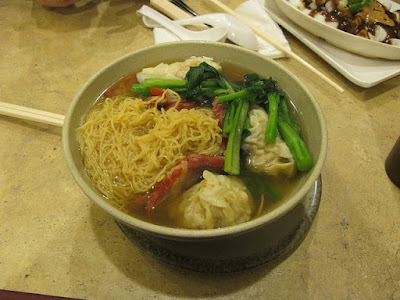 ABC Restaurant in heart of San Francisco's Chinatown is anything but. (American Born Chinese, that is.) From the bins of Cantonese-style pastries at the front to the apparent reluctance of the servers to bring you your check when you have to leave, it's as Hong Kong as it gets. (Not to even mention the macaroni soups.) It's also the place that a couple of graduate student friends from Guangzhou swear reminds them most of home. Therefore, when old China hand and Professor Emeritus at Zhongshan University, Lonnie Hodge, along with his ex-student Li Huiqing (at Berkeley on a fellowship) brought growling stomachs along on our Chinatown crawl, it was a logical place to stop.

I opted for the cha siu wonton mein (a.k.a. 叉烧云吞面, cha shao yun tun mian in Mandarin), a classic combination of southern style wontons and fine egg noodles in a bouillion-like broth topped, in my case, with thin slices of fatty Cantonese-style barbecued pork. I'm still learning to like the thin HK-style noodles (I've likened eating them to chewing on someone's hair) and slowly succeeding, I think. These had plenty of chew to them, which somewhat redeemed them from their meager circumferences. The wontons were 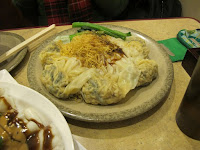 the star, enormous and packed full of fresh-tasting, snappy shrimp and vegetal accompaniments. The scale of these wontons is more evident in the photo to the right of the "lo mein" version of the same dish, enjoyed by Ms. Li. We accompanied our wheaten noodles with a plate of chang fen, wide rice noodles topped with a sticky, peanutty syrup which was tasty but a bit sweet to my taste.

Would I return? I will, and I have. ABC has been a go-to place for me for wonton mein for a few years now.