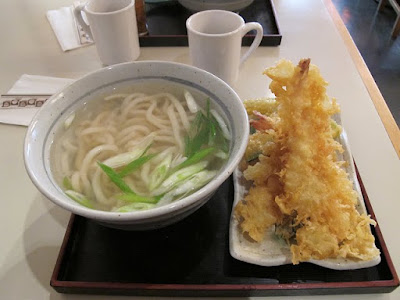 At the Nihonmachi Street Festival yesterday the charcoal-grilled meats were enticing, but my visit followed upon my eighth straight Friday night at Off the Grid, so I decided to forego street food for the quietude of a former favorite noodlery, Kui Shin Bo. Kui Shin Bo is in a forlorn second-floor corner of the equally forlorn Miyako Mall (which is overshadowed by the bustling Kintetsu Mall); on arrival I noticed changes, not the least of which was a friendly server for a change. Subsequent research confirmed that the place had indeed The changed hands since my last visit.

The chashu udon which I had a sudden craving for was not to be had on that visit, so I opted for the shrimp tempura udon. I liked the spartan presentation, just the udon noodles and onions in a clear broth with the tempura on the side (it has not always been that way). The soup had a refreshingly clean, if salty, taste, and the noodles were perhaps a bit too soft. Portions of both the udon and the tempura were generous, though less batter and more shrimpmeat and vegetables would have been nice. As always, the price was right, $7 for a decent sized lunch.

Would I return? Perhaps, for another shot at the chashu udon, though the consistency of the noodles seemed off, and I DO miss that cranky waitress of yore.