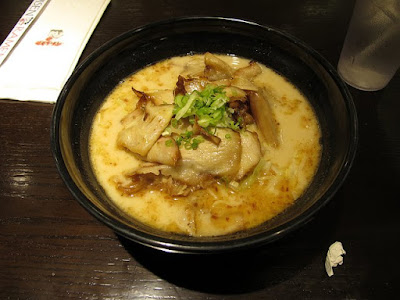 Ajisen Ramen is a fast food noodle chain which originated in Kumamoto, Japan and is growing rapidly, especially in Asia. In Shanghai, where I had my only previous Ajisen experiences, there are at last count 189 outlets, by way of example. Today the first Ajisen Ramen shop in San Francisco opened in the basement food court of the Westfield San Francisco Centre, leaving us only 188 behind Shanghai. Despite being somewhat olfactorally challenged, thanks to a head cold resulting from our endless non-summer of 2010, I decided to check out Ajisen SF on its first day.

I arrived at Ajisen in late afternoon (4:00) in order to avoid the hectic first-day lunch period and found the dining area still about 75 percent full. I pondered ordering the Spicy Beef Noodle option from the laminated picture menu to see if it corresponded to the honestly spicy "Volcano" noodle dish on Ajisen's Asian menus; my condition, however, combined with the absence of cold beer from the menu, steered me to blander fare. My choice, the "Supreme" Pork Ramen, appeared to be Ajsen's tonkotsu broth option, though the two servers I queried could only confirm that it was a pork broth. This broth was almost offensively unctuous and creamy, though blessedly not overly salty. It went well with my cold, though I doubt I would choose this option while in full health. The razor-thin pork slices were surprisingly dry, reminiscent of the shavings of beef found in Lanzhou lamian soups in China, functioning more as condiments than as protein sources. I know nothing of the provenance of the noodles used by Ajisen, but they were the most satisfying component of my bowl, having been cooked to just the right degree of al dente goodness. 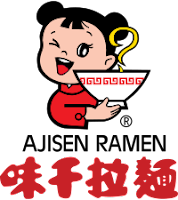 Ajisen's noodle bowls range from $6.50 for the eponymous "Ajisen Ramen" bowl to $9.25 for the seafood bowl. There are also appetizers like gyoza, fried tofu and edamame. A separate laminated menu is offered for drinks, which include bubble teas. They offer an unsweetened cold green tea beverage, but I was told they were out of it when I ordered it. I'll most likely return to vet the Spicy Beef noodle option, and perhaps some of the other more demure broth-based bowls.