Mighty Joyoung to the Rescue II: Out of the Box and Into the Bowl 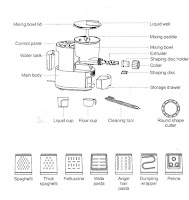 "But it's made in China," said my Chef-partner Ju Ju (who also was made in China) when we unboxed "her" pricey Christmas present.
"Where else," I retorted, "would you look for a 'military grade' Chinese noodlemaker but China?" Joyoung (Chinese name 九阳, more correctly transliterated as "Jiu Yang") is a dominant brand in home noodle makers, rice cookers, soy milk makers (including a $400 model), instant cookers, etc. throughout Asia.  As I mentioned previously, I am lazy, and its main attraction to me was the degree of automation: water in one container, flour in another, push a few buttons and voila! noodles to eat. About the only thing that isn't automated is the cutting of the noodles. Have your kitchen shears nearby so you can snip the noodles at desired length as they come out of the extruder or you may end up with 10' long noodles (which might be appropriate for my next birthday). Easy to clean? I'm not sure if the brochure claims it is (they usually do), but I leave that to my partner, who doesn't trust my degree of fastidiousness. Mind you, you can't avoid some sticky dough clinging to various parts as you disassemble the business end of the machine. (Note that there is a "Clean" button on the console, but it refers only to cleaning the nozzle that distributes the water.) 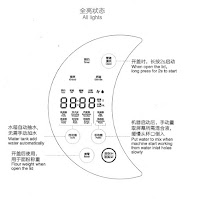 A couple of caveats here: as implied, one of the most desirable features of the machine's degree of automation it its ability to precisely calculate the amount and timing and infusion of water in the dough making. It does this by weighing the flour on a built-in scale, so be sure to press the "Reset" button to zero the scale first. Also, when you select your noodle type, you'll probably want to press it twice for "Chewy Noodles." The single-press "Fast Noodles" seems to be desirable only if you plan to use them immediately. The "fast" noodles do not store well, caking under their own weight, while the "chewy" noodles refrigerate well and freeze well. The "Chewy Noodle" mode adds a rest period for the dough (indicated as "Rise" even though no leavening is involved).
The photo at the top of this entry features a soup made by Ju Ju using noodles made with Mighty Joyoung's Udon ("spaghetti") noodle setting that were subsequently frozen.

So who is Mighty Joe Young?

Mighty Joe Young was the chimpanzee hero  of the movie of the same name. my generation's answer to King Kong.

Mighty Joe Young is a 1949 American black and white fantasy film distributed by RKO Radio Pictures and produced by the same creative team responsible for King Kong (1933). Produced by Merian C. Cooper, who wrote the story, and Ruth Rose, who wrote the screenplay, the film was directed by Ernest B. Schoedsack and stars Robert Armstrong (who appears in both films), Terry Moore, and Ben Johnson in his first credited screen role. Animation effects were handled by Ray Harryhausen, Pete Peterson and Marcel Delgado.[3][4]

Mighty Joe Young tells the story of a young woman, Jill Young, living on her father's ranch in Africa, who has raised the title character, a large gorilla, from an infant and year s later brings him to Hollywood seeking her fortune in order to save the family homestead.  [Wikipedia]