I've been fascinated, if not always totally enthralled, with the traditional Uyghur noodle specialty known as laghman since first sampling it at Kashkar Cafe on Brooklyn's Brighton Beach Avenue nine years ago. It's a Central Asian noodle dish, popular with China's Xinjiang Uyghurs as well as the populations of neighboring "-stans"* generally.  While laghman invariably starts with bouncy, muscular house-made noodles and colorful. toppings, the flavor profile it brings to the palate can sometimes be underwhelming.  Here's a clue from the excellent blog The Silk Road Chef:


[Laghman]...  is noodles topped with a sauce of meat and vegetables. Basically anything is game – lamb, beef, chicken, green beans, bell pepper, bok choy, squash – whatever fresh vegetables are on hand. However, there are a few common points: onion, garlic, tomato sauce, and bell pepper are almost always present [emphasis mine].

Sound familiar? From too-timid hands, laghman can come to you tasting like under-seasoned spaghetti from too far up the Silk Road.

As happened with my side-by-side comparison of two relatively new self-serve udon shoips, my erratic scheduling afforded me the opportunity to do the same with two very different venues offering laghman, Eden Silk Road and Silk Road Express, this time with separate posts.


Eden Silk Road on O'Farrell St. in San Francisco's Tenderloin District (a.k.a. "Lower Nob Hill")  is one of three similarly named Bay Area outposts of  Xinjiang Herembag Trade Co., a Xinjiang-based empire of halal food venues. Eden Silk Road is a sparely but nicely appointed room that considerable thought and investment has gone into, and its managably-sized and well-focused menu offers many near eastern and Uyghur specialties that I will be eager to try. But first the noodles.

Eden Silk Road was nearly empty when I entered just after its opening for dinner service, understandably, since it was on the eve of Chinese New Year Eve. The restaurant closes for two hours after lunch service to prepare for dinner service, and prepared they were to hit the ground running, unlike some restaurants where my 5:00 entrance awakened a snoozing chef or two.

I ordered laghman with lamb (beef is the default but lamb is available for the same price) and a side order of samsas (two to the order). Being a halal restaurant the serve no alcohol, so I ordered tea. (I suppose I could have brought my own flask of vodkas, like the good ol' boys at halal Kashkar Cafe in New York.) My samsa arrived promptly, followed by my main dish after a suitable interval. Thanks to the alacrity of service, both dishes arrived piping hot. 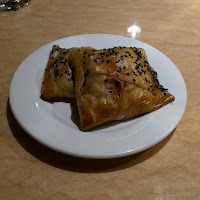 If I were to describe my laghman at Eden Silk Road, it would be healthy. The saucing was devoid of oiliness (the same could not be said of the samsa), and even the sparse lamb chunks were lean, yet tender. The veggie matter was cooked to the right degree of crispness, and the hand-made noodles (so claimed by the menu) bouncy and bitey. Alas, the "secret" Laghman topping was a bit bland to my taste (and there was nary a chili pot on the table to sex it up with). The visible ingredients were primarily the obligatory tomato, onions, bell pepper and garlic (eith too little of the last). Only the presence of some chewy "wood ear" mushrooms  gave a "made in China" stamp to the dish; the overall personality of the dish was sedately Mediterranean, with a very faintly spicy tinge.  I don't know if they accommodate adjustment requests, but if I ordered it again I would ask for more spice heat, which would, in my mind, make it a very solid dish. As for the samsa, they were tastefully filled with a lamb and spinach-like filling, but distressingly oily. Next time I'll try the manti.

*According to Wikipedia it is especially popular in Kyrghistan and Kazakhstan, and also popular in Uzbekistan, Tajikistan, northeastern Afghanistan and in regions of northern Pakistan,
Posted by Gary Soup at 10:30 PM