Something Fishy About The Ramen At Hinodeya Ramen Bar 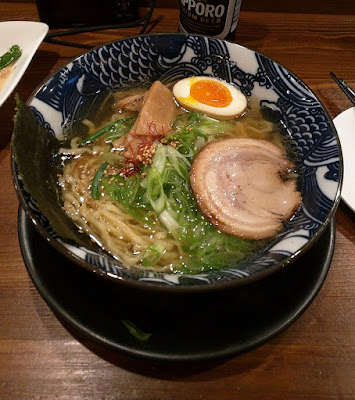 I dashed over to Hinodeya Ramen Bar in Japantown to reward myself for besting my pound-per-week 2017 diet goal for two consecutive weeks.  It marks my quest for noodles out of the house in 2017, not counting the two types of noodles served with out hotpot New Year's Day dinner at Dragon Beaux.

Hinodeya is the first overseas venture for a 130-year old Japanese restaurant group, and is modeled after a Tokyo restaurant noted for its innovative dashi-infused broth. Dashi is a soup base made from dried, preserved Skipjack Tuna and other seaborne ingredient. I've long been a fan of fishy soups, and have written here about Assam Laksa, a couple of Vietnamese Bun Mams and a whole flotilla of Mohingas, s well as a couple off other SE Asian fish-based soups.

Thanks (or not) to my Muni connections being exceptionally expeditious, I arrived at Hinodeya 25 minutes early for its 5:00 dinner service on this crisp Winter day. I was first in line, but the queue that formed behind me filled the restaurant once the doors were opened.

Once inside, I took my seat at the bar and ordered the house special Hinodeya Dashi Ramen, a side order of Crispy Fried Yam and a Sapporo Beer. Service was efficient and friendly if noisy, with greetings and orders in Japanese shouted cross the room in what I assume is traditional fashion, and I soon had my crispy yam pieces with the first bowl of the establishment's house ramen following soon after.

If I expected a revelation from the dashi ramen broth, I was a little disappointed. The soup, a chicken-bone broth infused with a soup base made from kelp, dried bonito flakes and small sardines, according to Hinodeya's Japan website, was perhaps a little too subtle for my untrained ramen palate. I tried to detect a forthright fishiness to it, but could only suss out a faint tuna-y taste, and if you grew up with tuna salad sandwiches as I did, you don't really associate tuna with fishiness. It left a bit of a cloying aftertaste, like the miso broth it much resembled. The toppings, while well prepared, seemed a bit stingy for a $14 bowl of noodles: a single thin slice of chashu, half a soft-boiled egg, a few sticks of menma, a single piece of nori. I couldn't help noticing that the "extras" section of the menu consisited only of more of what was already in the ramen (no corn, alas).  The noodles may have been the best thing about my bowl of ramen; curly and of medium thickness, they held their chewiness to the end. 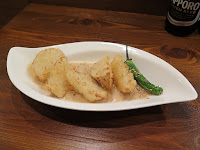 My side order of crispy fried yam was tasty, mouth-pleasing (the crispiness refers to the interior, not the coating) and came in a nice tangy sauce. Again, though, it was pricey: $8.00 for five chunks of edible tuber. The Japanese woman next to be ordered kar-age, which looked to be a better value -- a quantity of protein approximately equal in volume to my carbs for the same $8 price tag. I guess I should be thankful my bottle of Sapporo was only $6; I had paid $9 for a bottle of beer at Mensho Tokyo.

I'll be writing more about ramen (because it is there) and the more elegant and healthful pho this year as I fit them into my diet regimen. They both are typically lighter meals than my beloved Chinese la mien.

Where slurped: Hinodeya Ramen Bar, 1137 Buchanan St. (in the mall).