Taste Of Jiangnan -- A Bridge To Suzhou Style Noodles

Some time ago, while researching the history and the mystery of "Suzhou Cangshu Lamb Noodle Soup" I started to wonder what constituted a "Suzhou-style" soup generally. It took only a little more research to discover that it was a noodle soup I was already very familiar with: nearly every mian guan (noodle shop) in Shanghai I'd been to that didn't have Lanzhou or lamian in its name served this style of noodle soup.

Suzhou-style noodles, or simply Su noodles are sometimes referred to as the "ramen of China" for the emphasis on the broth and the use of thin, long noodles, but I take exception to that. For one thing, in Su noodle houses the noodles are usually fresh-made in house (cranked out by machine, if not hand pulled), not outsourced to an industrial noodle specialist as is often the case with ramen-yas.  And though the broths are similar, made from pork bones and possibly chicken, Su noodle broths tend to be subtler, with less reliance on salt and fat in their flavor profiles.

An excellent tutorial on the lore of Suzhou noodles is contained in this article, Noodling Up Suzhou Soup, including tips on how to order like a pro if you happen to be in Suzhou. 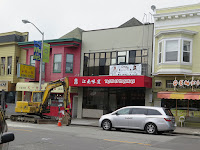 I found my Suzhou-style noodle soup in San Francisco at Taste of Jiangnan, which recently opened on Clement Street in what used to be known as "New Chinatown" (we have several newer ones now). It's a full service restaurant, not a noodle shop, but the staff are from the Wuxi-Changzhou area and the cuisine is heavily focused on Wuxi area food. Wuxi is a mere 25 miles west of Suzhou, and I knew that if they had noodle soup on the menu, it would be Suzhou style. I was right.

I found only one noodle soup on Taste of Jiangnan's menu (they also have an excellent Wuxi-style wonton soup). Simply called "red soup noodles" (awkwardly "noodles with soy sauce" in English). As mentioned in the tutorial mentioned above, Su noodles generally come as "red" or "white" soup noodles; otherwise choices are limited to toppings and relative proportions (toppings to noodles to broth, etc.) I chose braised pork belly as a topping for my "red" soup and left the rest to the chef.

My noodle soup and the braised pork belly toppings came from the kitchen separately, with the latter on a dish "across the bridge" (on the side ) from the former, underscoring the dish's Jiangsu pedigree:


"The authentic serving way is called guoqiao, which means crossing the bridge. The toppings are placed on a separate dish. When serving, pick the topping from the dish to the noodle bowl. The process is similar to crossing the bridge between two containers, which is where the name comes from."   -- Noodling up Suzhou Soup

The noodles were long and thin, similar to straight ramen noodles, and the broth was not unlike a shoyu ramen broth, but markedly less salty and with a touch of Jiangsu sweetness and complexity, a familiar flavor from my Shanghai days. The red-cooked pork, once I had carried it over the bridge to my soup, was tender and fragrant.

If anything, the noodles were too plentiful for the soup. There's a word for that:

Remind me to order it Kuantang ("literally loose soup, but refers to more soup and less noodles") next time. 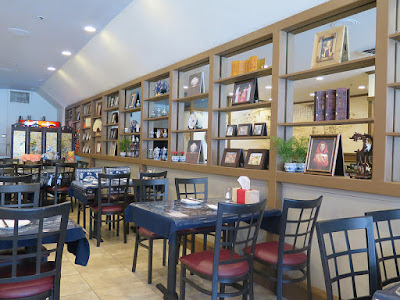