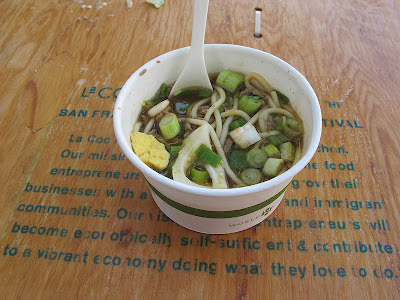 Thanks to La Cocina's San Francisco Street Food Festival, I recently got to sample ya ka mein, a New Orleans street favorite from its most celebrated purveyor, Miss Linda Green, who was imported from NOLA for just that purpose. Though the distant origins of this dish are obscure, we know from restaurant menu archaeologists that it emanated from Chinese-American restaurants and still exists in such restaurants on the eastern seaboard (particularly in Baltimore) as "yat gaw mein."


usually arrives in a white foam cup, brimming with limp spaghetti noodles, soy-and-ketchup-colored and -flavored broth, chunks of roasted pork or beef, boiled egg halves and a thatch of ragged-cut green-onion rounds....slurped from a bowl while standing on a street corner, [ya ka mein] is also known as Old Sober. 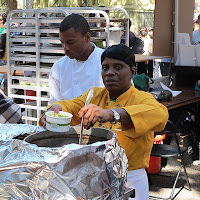 Linda Green, proprietor of Miss Linda Green's Catering, sells ya ka mein from a booth at the annual Jazz and Heritage Festival and from the tailgate of a pickup truck at other events in New Orleans.  Miss Linda is no mere ramen hacker, however. Though she has no formal training, she has the cooking chops to have kicked serious butt on the Food Network's Chopped: Pride of New Orleans episode, coming away with the big prize.

As for my ya ka mein experience?  I found the salty, peppery, bouillon-y cup of noodles comforting, if not  exactly life-changing; to be fair, it must be noted I was cold sober when I downed them.
Posted by Gary Soup at 8:50 PM