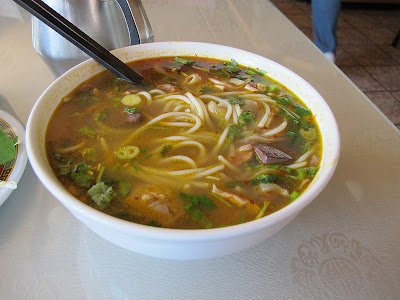 Maybe the third time is a charm, when it comes to seeking authenticity in a Tenderloin bowl of Bun Bo Hue. At Mangosteen, where I had my first (not counting a bow at Golden Flower in Chinatown) they eschew an essential ingredient, coagulated pigs blood. At Ngoc Mai I discovered that they selectively omit it (notably for palefaces like me).  "Go to the place across the street from Hai Ky Mi Gia, you'll get the real thing there," said my friend Alice, who is long on knowledge of Vietnamese food but short on remembering restaurant names.  That place turned out to be Sao Bien, formerly know as Vietnam II (alternately spelled as Vietnam Too). 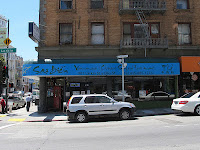 Sao Bien was about 90 percent full when I arrived around 1:00 and was shown to a two-top.  Contrary to some reports by Yelp malcontents, service was both prompt and efficient. Not only does the default version of their bun bo hue come with the pigs blood, but also with a whole pigfoot in addition to the beef and variety meats.  It's up to the eater to opt out with the "just beef" version.  The soup seemed comparable to Ngoc Mai's in complexity and spiciness (a decent amouit of heat) and was filled with similar medium width round noodles; however, today's seemed a bit overcooked and were soft almost to the point of mushiness.  Since it was the tail end of the lunch hour, the condition of the noodles may have been a result of cooking ahead to keep up with a demand flurry. All things considered, I'd say it was a tossup between the Sao Bien version and the Ngoc Mai version.