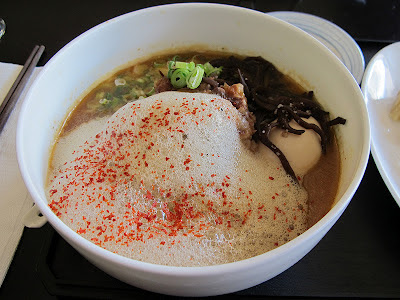 As mentioned in my last post, I made catching up with buzzed-about ramen offerings in San Francisco a priority after a fun run at rice noodles.  I got it together today to hit brunch at Nombe in the Mission District, the izakaya that topped 7x7's best SF ramen bowls list.  Nombe's new ramen chef is doing something apparently radical for ramen, making stock from beef bones rather than pork bones, and creating two signature toppings for it, beef cheeks and oxtail. (Beef noodle soup, now there's a concept!)  Nombe also serves some more conventional ramens including a Tonkotsu ramen, but I went with what 7x7 found remarkable, and ordered a bowl of Oxtail Ramen with a boiled egg add-in and a side of gyoza.

My oxtail ramen came as advertised on the menu, with scallions, mushrooms, "umami foam" (actually a uni emulsion) and a nice piece of tail. The broth was deep and beefy, smoothed out and made more complex by the foam, a welcome alternative to the aggressively medicinal spicing of Taiwan-style beef noodles, and more akin to mainland China beef noodle soups.  The oxtail, as mentioned, came on the bone, but was cooked to the point where it was easily pulled from the bone with chopsticks. The chief drawback of the oxtail bone in the bowl was to make drinking the last slurps from the bowl awkward (though doing so may be considered gauche in a classy ramen-ya anyway, for all I know). 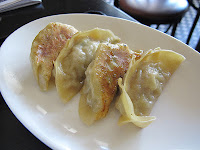 The one thing I didn't like were the noodles. They were the thin, curly type, and came a little too hard to my taste, reminding me too much of soak-and-serve instant ramen. (What can I say, I'm a la mian kind of guy in a ramen world here -- all my comments should be viewed in that context).  My other bone to pick with Nombe was the room's lack of charm.  I'm not usually a stickler when it come to atmosphere, but I'd expect a ramen joint with a $13 base price for a bowl of ramen (not even including an egg) to have invested a little in decor, and not look so much like the cantina it obviously once was.