Sheepish in Suzhou -- the Legend Behind a Lamb Noodle Soup 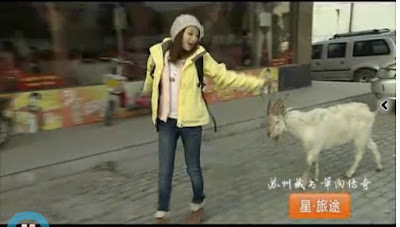 I'm a big fan of Chinese lamb noodle soup. ("Lamb," I should point out here, is the usual translation for yangrou, which can also, and in fact usually does in this context, mean mutton.) I generally associate the origins of lamb noodle soup with the cities of China's great midwest -- Lanzhou, Zhengzhou and Xi'an, for instance, not with Shanghai and the Jiangnan region. However, in the course of researching noodle houses in Shanghai I discovered that there are well over a hundred such establishments that self-identify as "Suzhou Lamb Noodle" houses. Moreover, nearly half of these more specifically identify themselves as Suzhou Cangshu lamb noodle establishments. What was this lamb that Suzhou is apparently so proud of? This sent me to Googling and Baidu-ing to educate myself on the matter and I managed to dig up this account.

Cangshu, it turns out, is a town on the outskirts of Suzhou:


"Cang means hiding and shu means books. Apart from its beautiful scenery and gardens, Suzhou is famous for producing scholars. Many famous ancient scholars, writers, poets and painters were born in the area. After the Emperor Qin Shihuang unified China in 221 BC, he became notorious for burning the books of intellectuals and burying Confucians alive. Local tales in Cangshu tell of book burning. Long ago students and scholars there had to bury their books to protect them, and to save their own lives. They dug them up 15 years later when the brief dynasty ended and named the town after their sad experience. Ancients believed that all the plants and trees in the town absorbed the wisdom and the aroma of buried books, through their roots. Local sheep grazing on the wise grasses ingested the wisdom – and that’s why mutton in the town doesn’t have that strong odor."

It's a pretty story, to be sure, that an infusion with the wisdom of the ancients can make gamey meat fragrant, but the author of the cited explanation simply couldn't let well enough alone.  Castration, he opines, is the real reason the mutton's flesh isn't gamey.

The picture at the top of this post was captured from this recent video on Youku.com (China's YouTube). It's of a Shanghai TV reporter tracking down the very story of Suzhou's Cangshu lamb, and includes some mouthwatering footage of her slurping down some noodle soup. It's in Chinese, but it's easy to follow the reporter's journey from noodle shop to stockyard to restaurant kitchen. It also includes an immersion in musical Suzhou-inflected Shanghai dialect.
Posted by Gary Soup at 9:03 PM