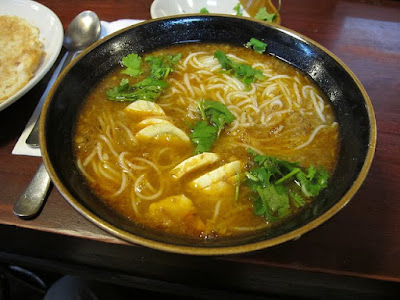 San Francisco is blessed with a number of solid Burmese eating places, including Burmese Kitchen, which I had never visited before today, all serving Mohinga, considered by many to be the national dish of Burma. It was a raw day today, the coldest so far this Winter, and it seemed like a good day to warm myself up with a bowl of Mohinga; not because it is spicy (it is hardly that) but because of the warming richness and depth of flavor that it brings. Burmese Kitchen also happens to be nearby the Asian Art Museum, which was due for a visit by me.

I found the restaurant's dining area attractive and comfortable, if a bit kitschy, with a grass hut motif going. A high counter with stools, similar to a ramen bar, added to the comfort of solo diners like me. I ordered Mohinga with an optional sliced boiled egg in it, and a roti on the side. 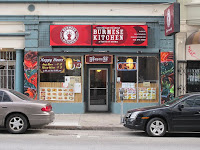 Mohinga has been called the Burmese version of pho. It has a number of variations, but the basic version is rice noodles in a fish broth thickened with chick pea flour and seasoned with garlic, onions, lemon grass, and ginger. The noodles are vermicelli sized, called nanthay noodles in Burma. The broth is made from extended (even continuous) simmering of specified fish types (varieties of catfish are acceptable) and may or not contain actual chunks of fish when served (Burmese Kitchen's did not). To add substance, various add-ins are offered. Burmese Kitchen offers fried chickpeas in addition to the sliced hard-boiled egg I ordered. Other toppings may include shredded spring onions, shredded raw or cooked green beans or slices of fried squash. My bowl also came, pho-style, with a complimentary garnish dish containing fresh cilantro and a lime segment.

I found the delicate, complex flavors ot my bowl of Mohinga to be deeply satsifying. The noodles were less toothsome than I'm used to with pho (and all manner of wheaten noodles) but this may be just a Mohinga style; along with the absence of any chili heat, the softness of the noodles seemed complicit in delivering an unctuousness that was not at all unpleasant. I also wished I had order the fried chickpea add-in as well as the boiled egg; even accompanied by a roti (which I found to be a little on the greasy side) my lunch was barely substantial enough to get me through the cold afternoon.

A nice little overview of Mohinga's history and its place in Burmese society by Dr. Khin Maung Nyunt can be found here.