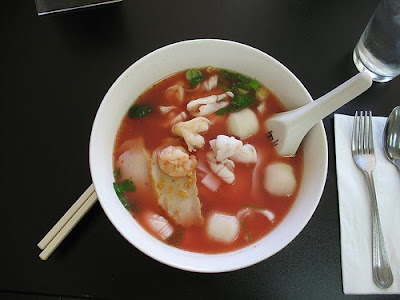 On a foray to Lers Ros, the local foodies' New Best Thai Restaurant Friend last week, the notion for a noodles-only blog was already bubbling on the stove of my mind and I decided to take a flyer on something totally new to me, yen ta fo. Yen ta fo, which is เย็นตาโฟ in Thai, according to one thread on Chowhound.com (but don't hold me to that) is an eccentric rice noodle-based chowderish soup which seems to feature seafood prominently or exclusively. What's eccentric about it is the color of the broth, which is pink. It doesn't really come through in the photo above, but the broth in my yen ta fo was not red, but pink: shocking pink; Day-glo pink; Hello Kitty pink. It was a food color that Dr. Seuss could have dreamed up.

The pink of yen ta fo apparently comes from the fact that the soup broth was traditionally made with red/pink colored tofu (like to Chinese hong doufu ru, which was itself probably colored with red yeast rice). The yen ta fo at Lers Ros consisted of rice noodles (choice of vermicelli, regular width or broad flat noodles) in the sweet-sour-spicy pink broth, and a generous amount of shrimp, fish balls (said to be a necessary ingredient), cuttlefish, veggies, and what may have been thinly sliced dried tofu. The complex broth had a good chili kick, perhaps emphasized by contrast with the Barbie Doll coyness of its color, and the soup soup as a whole made a very satisfying light meal.

The yen ta fo ($7.25 for a large bowl) is something I'd definitely order again at Lers Ros, and look for at other Thai restaurants.